The easy way to backpack across Thailand

Written and Photographed by Lester Ledesma 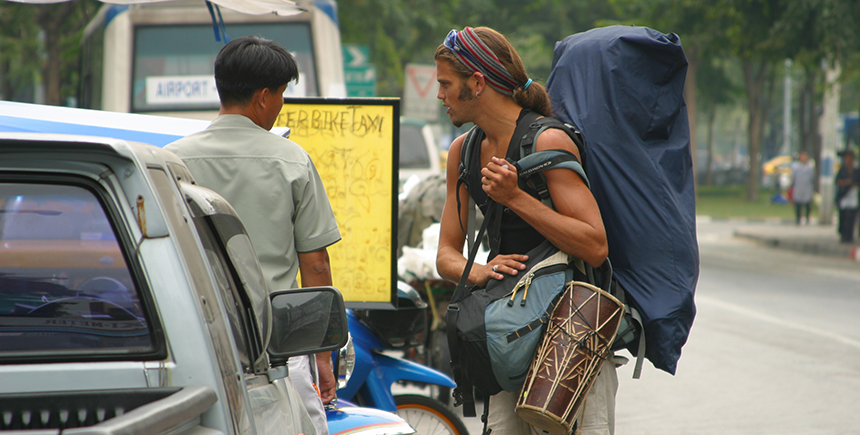 A backpacker in Bangkok

Thailand’s location at the center of mainland Southeast Asia makes it a convenient gateway to the rest of the region. And travelers don’t need much time or money to get to know the kingdom — Lonely Planet calls it one of Asia’s best value-for-money destinations. Here’s our itinerary for a quick, easy and affordable trip from south to north, one that takes in the classic Thai stops.

From Manila, take a direct flight to your first stop: Phuket. Located on the west coast, this famous holiday island is an excellent first taste of Thailand’s natural charm. Kick off your grand tour by kicking back on one of Phuket’s many idyllic beaches. Afterwards, head farther out to explore the rest of the country’s southern coastline. There’s Krabi and the Phi Phi Islands with their stunning limestone cliffs, and Koh Phangan with its full-moon parties and crystalline waters.

From the kingdom’s southern extreme it’s about nine hours to the capital. Take the night bus to Bangkok, but don’t get off in the Big Mango just yet – instead, stop for a day or two at Samut Songkhram (some 80km southwest of the capital) to experience the province’s traditional riverside communities and picturesque floating markets. In many ways, these busy water villages evoke Bangkok during an earlier era, when the Thai capital was still known as “The Venice of the East”.

Continue onward to the heart of Thailand where Khao San Road, the backpacker haven, awaits. Bangkok is a steamy, chaotic mix of old and new, the familiar and the exotic, where glitzy malls share space with centuries-old temples and royal palaces. Get your fill of the city’s frenetic pace before heading north (we recommend taking the highly efficient state railway network) for about 90 minutes to the ancient capital of Ayutthaya. Here you’ll find the remains of this storied Siamese kingdom, which boasted a city that was, in the 1600s, said to be even more cosmopolitan than its European counterparts. Destroyed by the Burmese in 1767, Ayutthaya remains home to ruined temples and royal palaces that nonethless offer a glimpse of past glories.

Another fascinating ancient city is located farther north, about seven hours overland. Sukhothai Historical Park is an even more impressive showcase of Siamese culture than Ayutthaya, thanks to its grander structures and quieter surrounds. Rent a motorbike and scoot among buildings that have stood for over 500 years. You’re now in Central Thailand, the country’s rice bowl and the region where the purest form of Thai is spoken. From here it’s just another six-hour bus ride to the northern city of Chiang Mai.

Hot and dusty Bangkok stands in sharp contrast to Chiang Mai, whose cool and damp climate owes in large part to its location in the mountains near the Thai-Myanmar border. On these slopes, hill tribes farm coffee and tea while maintaining lifestyles that have barely changed over the generations. Visitors can explore these parts on foot or by elephant; either way, the trekking is excellent. Or better still, splurge on a 4×4 to visit the adjacent mountains of Doi Chaang, Doi Tung and Doi Mae Salong.

By this time you’ll have enjoyed a delightfully diverse sampling of Thailand’s attractions. You can then choose to head back to Bangkok (It’s a 12-hour road/rail trip, so by all means take the night bus or a sleeper train) to catch an outbound flight or head off the beaten track to the country’s northeastern region.

This article originally appeared in the June 2015 issue of Smile magazine.