Discover the past at Banteay Chhmar in Cambodia

We travel north-west of Siem Reap to trace a centuries-old story of loyalty, intrigue and rebellion with a cast of thousands 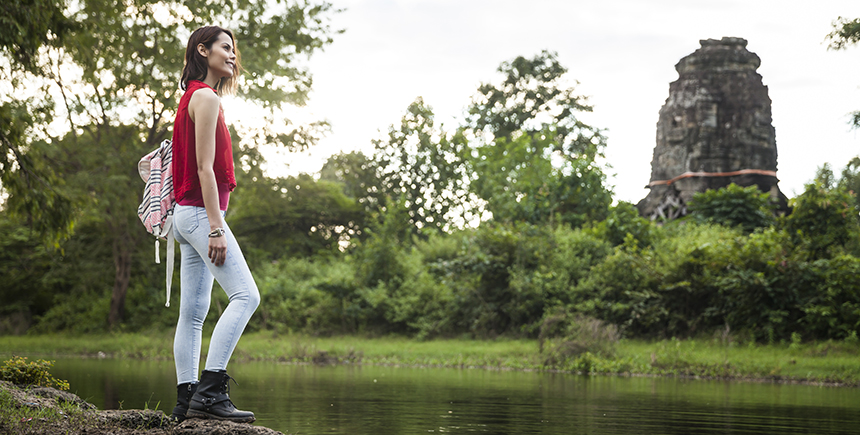 All set to explore the archaelogical complex 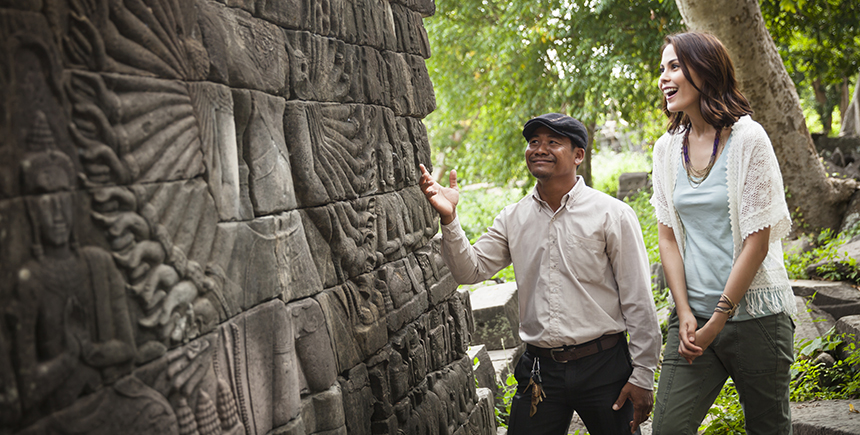 A local guide explains the carvings on the walls 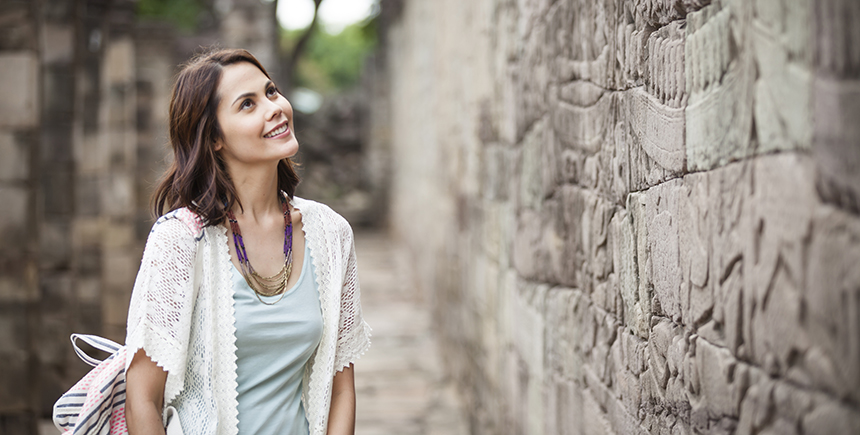 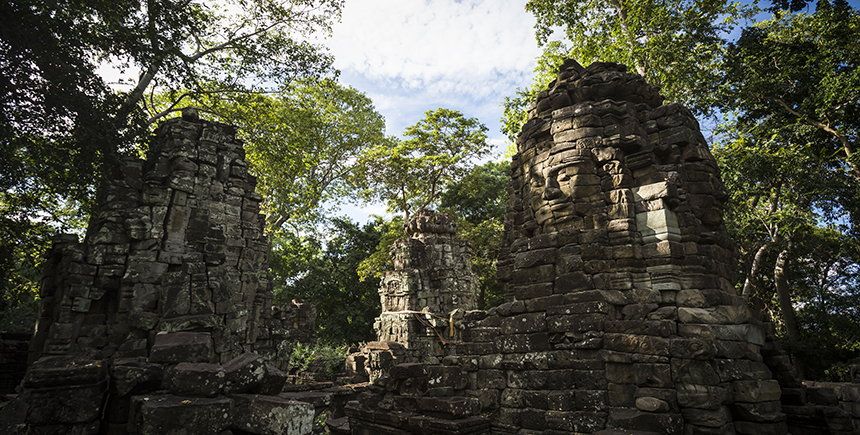 Tower 18, the only tower retaining all its four original faces 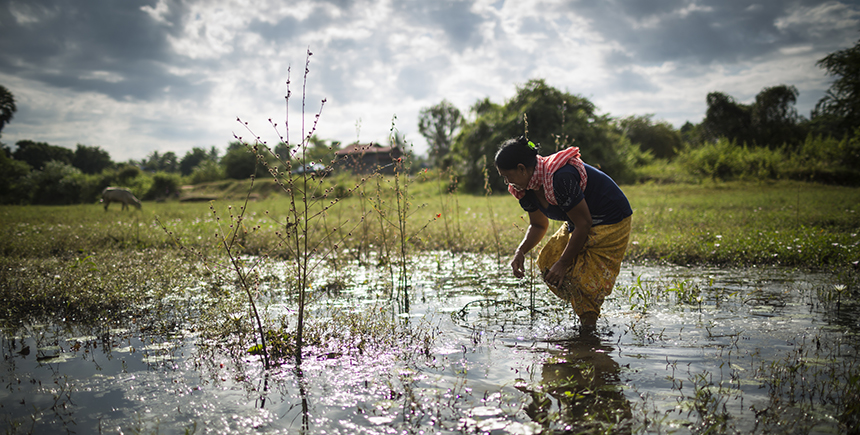 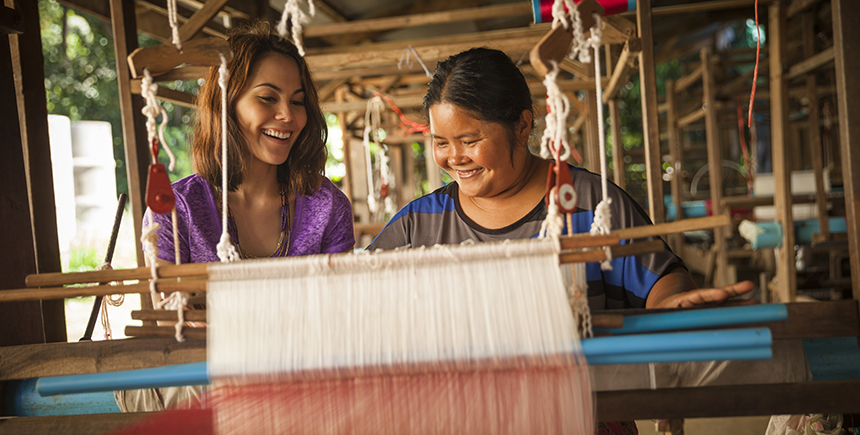 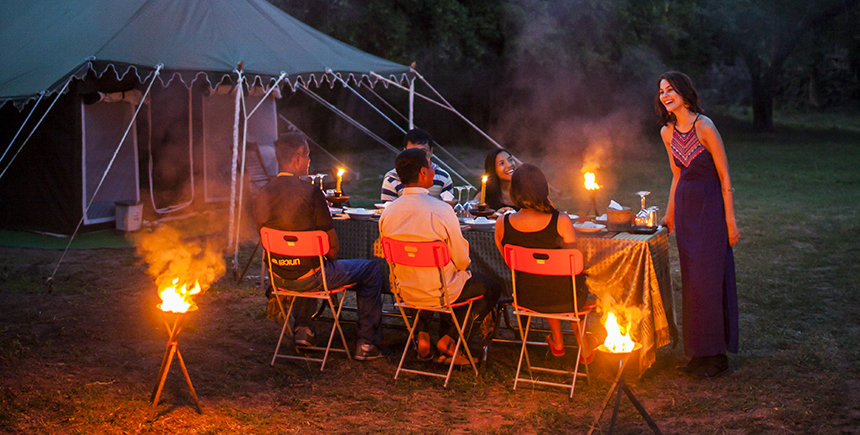 Camping on the temple grounds in comfort and style

I’m a person, not a mountain goat, I tell myself as I carefully position my foot on an awkwardly angled sandstone block and shift my weight. My traveling companions are coping with Banteay Chhmar’s topsy-turvy walking paths better than I am at the moment, leaving me to bring up the rear. In my struggle, I almost forget to look up. When I do, it’s directly in front of me: the Bayon-style “face tower” known as Tower 18, its impassive visages held high, as if human vices and the caprices of nature had not laid its surroundings low.

Also read: 6 best alternative things to do in Siem Reap

Built on shakier ground than Angkor Wat, the Cambodian temple of Banteay Chhmar was doomed even before the last stone block fell into place in 1216AD. Over the centuries, Banteay Chhmar’s component parts steadily succumbed to war, neglect and greed until a host of international NGOs took action in the 20th century to preserve the remnants that survived.

What remains today displays a heartbreaking beauty, precisely because much of what has been “lost” is still here, albeit scarred and battered beyond recognition.

Off the beaten path

No tuk-tuk or public transport connects Siem Reap with Banteay Chhmar. Getting there — as with exploring the temple itself — requires a solid commitment, and therein lies part of its charm. A hired van picks us up in Siem Reap early in the morning and we’re soon speeding west down National Highway 6 for about 100km. At the city of Sisophon, the van makes an abrupt turn north, heading up the unfinished National Road 56 and kicking up clouds of dust as we go along. All told, three hours have passed by the time we reach the moat encircling the temple complex.

The journey to Banteay Chhmar, even at the height of its glory, was never easy. The site was always out of the way, even as the Khmer kings built a highway system that stretched from Prasat Hin Phimai in the north (in present-day Thailand) to Angkor Wat in the south. Travelers to Banteay Chhmar had to venture about 50km off the nearest road; 800 years later, the trip isn’t a whole lot easier to make.

So why build a massive temple in such a remote place? Nobody can say for sure. There may already have been a thriving Buddhist community on this site circa 800AD, long before the Khmer King Jayavarman VII ordered the construction of Banteay Chhmar in the 12th century. But the presence of images of Jayavarman’s son in the temple’s stone-relief carvings may point to a personal — and quite tragic — point of origin.

Battle on the eastern wall

In the pantheon of Khmer kings, King Jayavarman VII stands as the greatest of them all. During his 30-year reign about eight centuries ago, he expelled Cham invaders, put down a rebellion and initiated an ambitious building program that gave the world Bayon, Ta Prohm, Preah Khan and Angkor Thom, all in present-day Siem Reap.

In most of these ventures, he had the help of his son, the crown prince Indravarman. A giant tableau on the eastern wall — painstakingly reconstructed from the surrounding rubble by archaeologists and local volunteers — tells the epic story of the king’s battles, with Indravarman constantly by his side.

The eastern wall is just a fragment of what once stood here; only about 300ft of the original 1,300ft of sandstone wall remain. This is our first stop in the Banteay Chhmar complex; we climb a short wooden staircase to the wall platform and marvel at the expansive sandstone panel before us, which depicts an epic battle between the Khmer and the Cham.

In the image, gigantic figures of Jayavarman VII and Indravarman oversee lines of Khmer soldiers as they attack the Cham formations head-on. As the action progresses from left to right, the Cham break formation, retreating to the safety of their lands across a river. Bareheaded Khmer chase down fleeing (and head-dressed) Cham, who peer fearfully over their shoulders.

Once we’re past the eastern wall, getting to Banteay Chhmar’s component parts requires a great deal more agility and balance. Instead of level ground or paved sandstone, we’re traveling on jumbled blocks that litter the ground, the remains of Banteay Chhmar’s walls. The tumbled, skewed blocks of sandstone bear witness to centuries of neglect.

Ongoing work by the Global Heritage Fund (GHF) has uncovered the root cause of Banteay Chhmar’s fragility: terrible foundation work. “The foundations vary randomly from just a bed of sand in some areas to a layer of laterite [a type of soil] to the occasional sandstone block,” a 2011 GHF paper concluded. “If this lack of foundations is indeed carried throughout the complex, the extent of the collapse is perhaps not so surprising.”

The surrounding jungle also played a part in Banteay Chhmar’s destruction. Cracks between the stone slabs were invaded by tree roots and creepers; as the trees grew, the expanding roots pushed the blocks apart and ultimately brought the walls down. Human greed, though, inflicted greater damage within a shorter span. As we scramble over the western side of Banteay Chhmar’s inner wall, we pass one of the temple’s two surviving bas-reliefs of the bodhisattva Avalokitesvara, the enlightened being who emanates compassion for humanity.

Avalokitesvara was revered throughout the Khmer Empire; devout Buddhists rendered the image of this great aspirant to Buddha-hood with eleven heads and a thousand arms to symbolize his receptiveness to the cries of the unredeemed and his willingness to help the needy. An ugly hole in the southwestern wall, jack-hammered away in 1998 by suspected rogue Cambodian Army troops, testifies to the detrimental effect of avarice on Cambodia’s priceless cultural heritage.

The authorities nabbed some of the thieves responsible and recovered part of the pilfered wall in a covered truck bound for Thailand. This shipment was taken to the National Museum in Phnom Penh for safekeeping but a larger portion, containing two other reliefs of Avalokitesvara, simply vanished into the ether.

Such threats are being held at bay, at least for the moment. Since undertaking massive restoration work in 2008, US-based NGO Global Heritage Fund’s (GHF) archaeologists and their Khmer counterparts have managed to prevent further looting, reconstruct large sections of the temple and coordinate with surrounding towns to implement a community-based tourism program.

All this work has yet to solve the mystery of Banteay Chhmar’s cloudy origins. As we continue to walk along the western wall, tantalizing clues crop up that appear to reveal more about the life of crown prince Indravarman. A section of the western wall features Indravarman prominently in a scene that seems more fantastic than real-life. The Hindu monster Rahu, bringer of eclipses, can be seen twice, battling Indravarman and devouring a beast of burden hitched to a cart. Could this be a metaphor for Indravarman’s successful battle against a pretender with designs on the throne? And did the prince die in the process?

It’s possible that Indravarman himself did not survive the battles depicted on Banteay Chhmar’s walls. The inscriptions in Phnom Penh reveal that he was honored in a sanctuary within Banteay Chhmar, along with four lieutenants who had died saving his life. Perhaps a distraught King Jayavarman VII ordered the construction of Banteay Chhmar to memorialize the prince. Perhaps the remote temple site marks the spot where the prince fought one of his many running battles against the Cham. Perhaps, perhaps, perhaps. Out of the 50 “face towers” that once stood in Banteay Chhmar, only Tower 18 survives.

If the towers could talk

Constructed in the Bayon style pioneered during the reign of King Jayavarman VII, Tower 18 retains each of its four original faces, which look out to the cardinal points. This is the last stop on our Banteay Chhmar grand tour, set right in the middle of a field of scattered sandstone blocks that require the aforementioned mountain goat skills to navigate successfully. Heavy monsoon rains in 2009 might have brought Tower 18 down with the rest of the walls here were it not for the heroic efforts of the GHF.

The foundation brought in high tech to save Tower 18. Using a unique, computer-assisted modeling program pioneered by the University of Heidelberg, GHF archaeologists made 3D scans of each block in Tower 18. Then they reassembled the lot in virtual space and used their computer simulation to re-engineer the tower to better cope with the elements.

It’s a pity sandstone can neither see nor speak; I can only imagine the stories that Tower 18’s four faces could tell. A thriving religious community numbering in the hundreds of thousands lived within these walls for hundreds of years. That is, until the rising Ayutthaya kingdom in the north-west invaded, eventually eclipsing the Khmer for good. For all of Jayavarman and Indravarman’s struggles against the Cham, the actual finishing blow to their empire would come from the opposite direction.

We scramble over a mess of sandstone blocks, some of them perilously loose, and exit under an intricately carved lintel set on the north wall. A wooden gangplank suspended over these last few yards helps us along and offers a hint of what the complete Banteay Chhmar experience might be like in a few years: tourists may soon traverse the entire temple complex on such gangplanks, avoiding the need for steady reflexes and footwear with grip.

Sadly, the temple may never be completely restored. John Sanday, the GHF’s Asia & Pacific regional director, aims to rebuild just a few key highlights of Banteay Chhmar as opposed to carrying out an expensive and tedious full reconstruction. The idea is not to reverse history’s effects but to let them play a central role in the presentation. For visitors, it’s not about seeing Banteay Chhmar temple as it used to be; it’s about recognizing that this ancient site, overtaken by the effects of time and nature, possesses a desolate beauty all its own.

How to get there
About 160km of highway separate Siem Reap and Banteay Chhmar. Cambodia’s public transport system does not cover this stretch so you’ll have to book a ride either through the Banteay Chhmar Community Based Tourism Office or via associated tour agencies.

Accommodation
Banteay Chhmar is too distant for a day trip. Stay overnight in one of the villages surrounding the temple for a more well-rounded experience. Homestays can be booked via the Community Based Tourism Office. You’ll crash on plain beds in ordinary homes with no air conditioning. Overnight stays cost US$7 per person per night. It’s US$2 for breakfast.

Glamp it up
Khiri Travel offers a pricier two-day “glamping” package that lets guests stay right on the Banteay Chhmar temple grounds. The package includes transport to and from Siem Reap, guided tours of the temple and of surrounding sites, and charming al fresco meals in the shadow of the area’s Khmer ruins.

In the evening of the first day, weather permitting, you’ll watch the sun set over Pol Pot Baray and have dinner with Khmer wedding-song accompaniment provided by musicians who play traditional instruments. In the morning, you’ll wake to breakfast with a view of Banteay Chhmar’s western wall before setting off to explore the other ruins in the area.

This article originally appeared in the January 2015 issue of Smile magazine.