How to have a family-friendly holiday in Davao 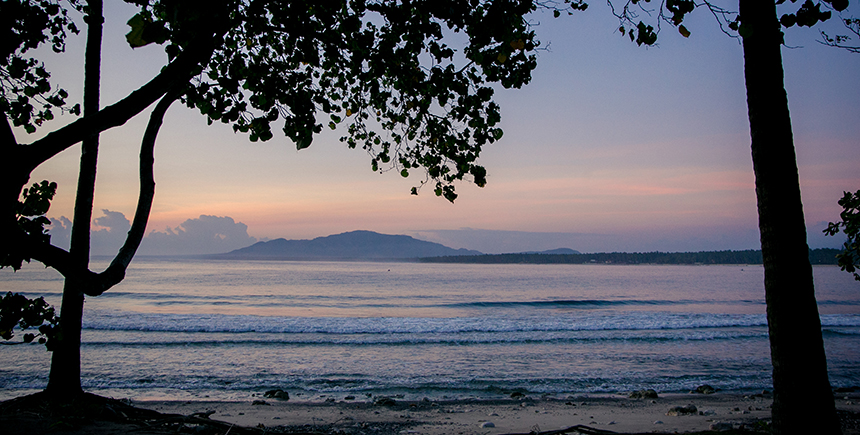 A scene from Dahican Beach

Family ties can be incredibly elastic, stretching in all directions across the world. Sometimes, these ties pull back. That explains why I was in Cateel, Davao Oriental’s town square, looking up at a José Rizal statue (there’s one in every town across the archipelago). The plinth beneath Rizal’s feet bears a few distinguished names; one belongs to my great-grandfather Julian Gonzales, who was mayor of Cateel during World War II. If I were superstitious, I’d have thought that Lolo Julian’s ghost had planned the whole thing.

Just two days before, I’d flown in to Davao City with my wife and daughter; the morning after that we were in a rented van, leaving early to begin a road trip planned by my mom. It was a chance for her to help me reconnect to our family roots: I had never been to Cateel, and the connection was quickly fading. To my daughter, Cateel may as well have been Mars. I had an inkling of our origins in that town; my kid had no idea at all.

I was concerned how she would process all this. Could this trip back in time be fun enough for a seven-year-old to enjoy? I needn’t have worried. Between Davao and Cateel stand two museums and a white-sand beach — my mom and I would get our walk through history, and my daughter would have a road trip to remember.

We were off to a good start at the Mount Hamiguitan Natural Science Museum (Brgy. La Union, San Isidro), a newly constructed gateway to Mindanao’s only UNESCO World Heritage Site, Mount Hamiguitan Heritage Park. This was no jury-rigged, glue-and-cardboard affair — it’s a proper museum, with exhibits, video displays and other immersive activities that laid bare the natural wealth of the 25,800ha Mount Hamiguitan reserve.

A couple of hours later, we arrived at Mati, the capital of Davao Oriental. A former governor had envisioned Mati as a center for culture as well as local politics, and during her eight years in office, her administration invested heavily in museums like the one at Mount Hamiguitan and another in Mati itself — the Subangan Museum. No other museum in the Philippines owns a complete skeleton of a sperm whale, much less displays it with pride in the foyer. The whole exhibition space is arranged around the 53ft-long skeleton: the displays focus on Davao Oriental cultural and historical threads, covering Mandaya and Kaagan tribal artefacts, re-creations of the province’s many natural wonders and a somber commemoration of Typhoon Pablo, which devastated Cateel in 2012.

We ended the day’s journey at Dahican Beach. La-Ne’s Kalapyahan, our chosen resort, offered traveler comforts such as cosy beds, air-conditioning and satellite TV, as well as immediate access to Dahican’s white sand and sunset views.

We headed down the scenic road from Mati to Cateel the next morning. The second day’s trip would also include a stopover at the scenic Aliwagwag Falls Eco Park (Compostela—Cateel Rd, Cateel) — a cataract of over 130 waterfalls, and a favorite picnic and swimming site for locals that’s just a few minutes’ drive from Cateel. But it was the latter destination we were aiming for first, our car skirting the Pacific coast as we sped down a well-paved highway that now serves as the major trade and transportation artery for Davao Oriental.

My mom explained that in her time, there had been no such road: as a teenager she traveled by slow boat, taking three days to reach Davao City from her hometown. That anecdote made Lolo Julian’s sacrifices clear to me, once we arrived at Cateel after a three-hour drive. Appointed mayor during the American occupation, he held the fort while his son-in-law (my grandfather) joined the guerrillas during World War II; in peacetime, he saw his children and grandchildren off to Davao City for better opportunities. I hoped I did his life justice, explaining who he was to my daughter, while standing in that town square that had been reconstructed since Typhoon Pablo. On this trip we’d pulled off that rare meeting of generations — my mom to me to my kid, and all of us to Lolo Julian, commemorated on a simple plinth where our family’s long adventure began.

Also read: This is why Davao is the most liveable city in the Philippines