[Video] The farmers of the Hon Khoi salt fields in Vietnam

A short trip to Hon Khoi, one of Vietnam’s largest salt fields, offers Nga Hoang a rare glimpse into the lives of its hard-working salt farmers

Produced and Written by Nga Hoang

Filmed and Photographed by Liem Tran 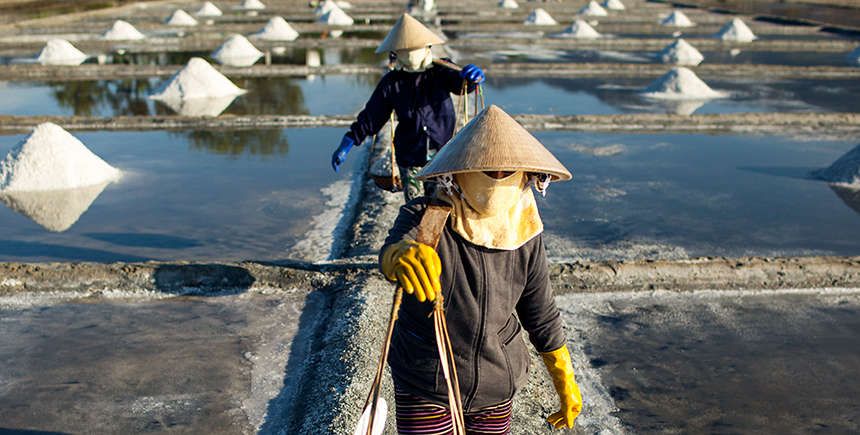 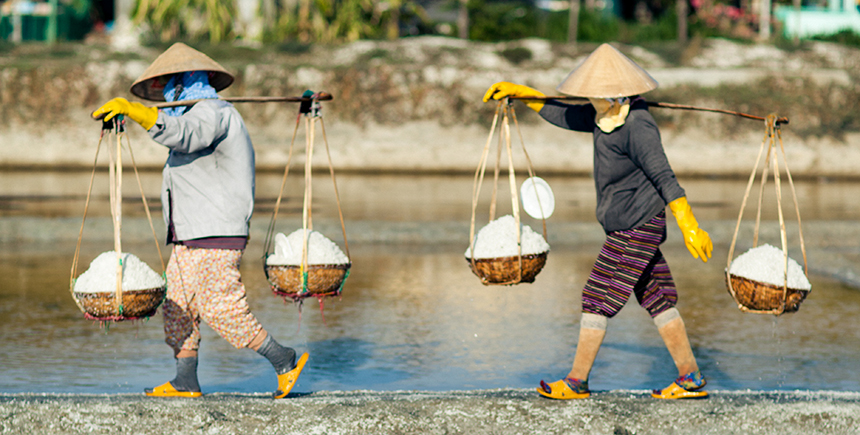 The salt farmers hard at work in the fields 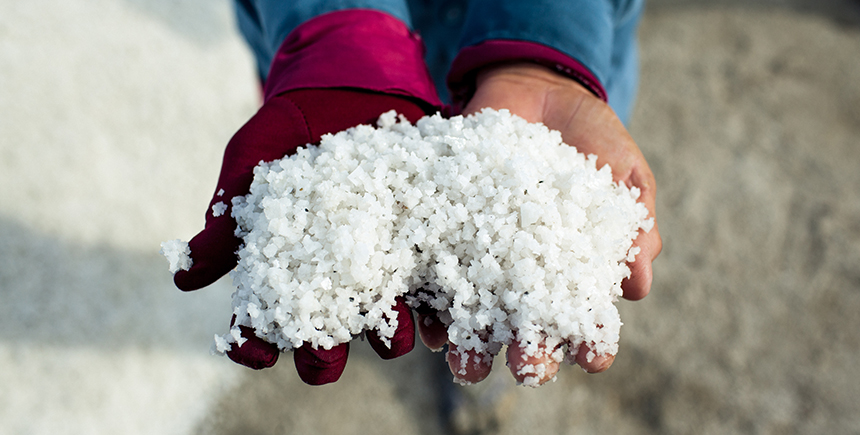 The fruit of their labor

Above video: The salt farmers of Hon Khoi toil in the fields under the blazing sun, and work extra hard to earn a living. Download the full transcript of the video here.

It was early June, well into Vietnam’s dry season that runs from May to August, and Ninh Hoa province was as hot and steamy as a sauna. I’d left Nha Trang, the nearest big city, just before noon, zipping down National Route 1 on a motorbike for nearly an hour, into Ninh Hoa and its main tourist town, the sparsely populated Doc Let.

Unlike in the city, life here moves at a slower pace, and cruising past gave me enough preview of the daily grind — local women serving hungry farmers bowls of bun ca (fish noodle soup) from makeshift roadside stalls, and hordes of children huddled around a rather deserted, forlorn-looking Hyundai shipping port for an early morning dip before cycling to school. There are few accommodation options in town and only one ATM that spits out cash only at certain hours.

The local economy in these parts thrives primarily on two things: tourism and salt production. There is Doc Let Beach, an almost entirely isolated and largely undeveloped beach — chalky white sand and turquoise blue sea as far as the eye can see — enjoyed by a handful of day trippers lounging underneath parasols and downing ice-cold beer.

But just a few kilometers from Doc Let is Hon Khoi peninsula, a vast swathe of salt fields that produces a third of all of Vietnam’s salt. With a coastline stretching as far as 3,260km, Vietnam produces 737,000 tons of salt every year, exporting 25,000 tons to countries like the United States and Japan. Handmade Vietnamese salt is also used for medical and chemical purposes in Korea.

But while salt farming was once a flourishing industry in the flatlands of south-central Vietnam, cheaper salt imported from Pakistan and India has driven the price of local salt down. Lower prices in the domestic market mean smaller returns, and farmers have to work extra hard to earn a living.

On the day of my visit, the glittering sunlight had transformed the fields into a huge, dreamlike mirror. Salt sparkled like white gold dust. The whole area was a vast checkerboard crowded with diem dan, or salt workers. While shoeless men busily raked the fields with wide-mouthed shovels, a group of ladies in conical hats — their faces covered in handkerchiefs and their feet clad in rubber boots — deftly carried two baskets each of salt on bamboo poles slung over their shoulders. It was back-breaking work, but there was an air of cheerfulness as the farmers went on about their work. In one of the country’s biggest salt fields, the harvest season was in full swing.

Salt of the earth

Salt making in Hon Khoi can be traced back to the French colonial era of the late 1800s. Back then Hon Khoi was known as Hone-Coché. In order to meet the demands of the French colonialists, many local people ditched fishing in favor of salt making, which was believed to be less daunting and more profitable.

Around that time the colonialists supervised the building of a 10km channel stretching across the three adjoining districts of Ninh Hai, Ninh Diem and Ninh Thuy. An army of locals dug a channel through which saltwater could flow into salt fields.

Now, as it was then, salt production is extremely labor-intensive — seawater is pumped into the fields and then left to evaporate under the sun for an average of 10 days. The men rake in resulting crystals from the fields. The women will then carry basketfuls of salt and dump them just outside the fields for later processing. The allocation of work according to gender is true of practically all Vietnamese salt farms. Men think of raking as a tougher task, as they have to go to the farm both in the morning and in the afternoon to pump water and rake salt.

During harvest season, salt farmers work constantly for up to seven consecutive hours under the scorching sun, in temperatures as high as 40°C. During their few minutes’ break, they chug mouthfuls of sugarcane juice for energy. As morning is the time for salt to dry and crystallize, most farmers work in the afternoon when the sun is harsh. The harsher the sun the better, as it will make the salt crystals form faster.

Life in Ninh Hoa might be forever tied to salt making. “We live in an area surrounded by saltwater,” says Huynh Thi Nung, who has lived all her life in Ninh Hoa province. “We cannot grow rice or vegetables. The only thing we can do is salt farming.” Madame Huynh Thi Nung is 63 years old and has been collecting salt since the Liberation period in the ’80s, when the country put an end to the dark days of war and colonial power. Salt harvesting lasts six months, starting from January to August, when it is warm enough for salt to form. Workers then look for other means of earning income for the rest of the year.

“We sell food in the local market. Even during harvest season, we are only hired to collect salt every 10 days. We get paid only VND100,000 (US$4.46) per day. It’s impossible to earn a living from salt harvesting alone,” adds Madame Dang Thi Doa, 52.

Bay Ngo Nhat, 50, has been farming salt since he was 17 years old. He and his family farm shrimps for the remainder of the year. He recalls the heyday of the salt making industry. “In my grandparents’ time, people could use what they earned from salt farming to buy rice paddies,” he says.

As the sun began to set, the salt workers prepared to head back home. The chatting and laughing were more animated than they had been earlier in the afternoon. Another day’s work done and dusted. A few of us who have come to marvel at the stunning, sun-kissed views remain, taking as many photos as we can. It is this spectacular scenery that’s expected to bring in a steady stream of visitors, breathing new life into the local economy built largely on salt.

How to get to Hon Khoi
Take a domestic flight, train or bus from Ho Chi Minh City to Nha Trang. From there, hop on a bus to Hon Khoi (book through a travel agent) or rent a motorbike. Hon Khoi is an hour’s drive from Nha Trang.

Best time to go
May to July

Capturing Hon Khoi’s beauty
The Hon Khoi salt fields are highly photogenic and are gaining popularity as a tourist destination. As working hours are mainly in the afternoon, the best time to shoot is 3.30pm, when the sun is less harsh. A 24-70mm lens is ideally suited for wide-angle landscape shots and portraits. Be courteous to the farmers and keep considerable distance while they work, or ask their permission before moving in for a close shot.

This article originally appeared in the July 2016 issue of Smile magazine.