What do the colors on Asian flags mean? 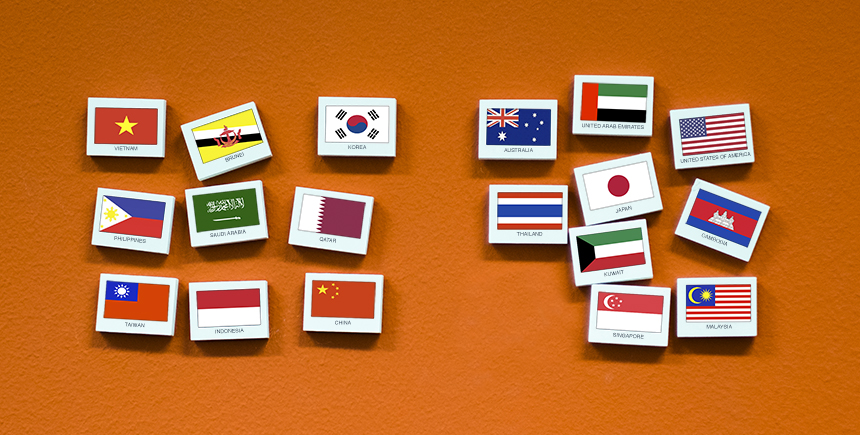 Evidently, four colors are all you need to express the entirety of a nation’s visual identity in a rectangle. Brunei, Malaysia and the Philippines use the maximum four, while both Indonesia and Singapore make do with a red-and-white emblem in a horizontal bicolor.

Flag designers work around this limited palette by pairing colors to specific meanings or messages. Some flag colors advertise their royal heritage, such as the yellow elements of Brunei’s and Malaysia’s flags. Yellow is a traditional signifier of royalty; Malaysia’s yellow crescent and star denote the Yang di-Pertuan Agong or the country’s head of state, while the yellow field on Brunei’s flag represents the sultan’s all-encompassing rule.

Red and white have long stood for courage and moral purity respectively among the peoples of Asia. These color connotations are rooted in history: the red- and-white bicolor now used by Indonesia is derived from the colors of the powerful Majapahit Empire, which conquered large areas of South-East Asia in the 14th century. Accordingly, red and white have long been favorite shades for Asian flags, flying above free-market havens like Singapore, as well as communist strongholds such as China and Laos.

Flag colors can also communicate a break with history. “The colors of the African National Congress [South Africa’s ruling political party, rooted in the black community] are black, yellow and green — the opposite of the colors of [South Africa’s former colonizers] the Dutch and English,” explains Ted Kaye. The red, blue and white of the flag of Laos demonstrate a similar rebellion against the former status quo: it was designed in 1945 as a reaction to the old Lao royal flag, which was mainly red with a three-headed elephant in the center.

The same goes for the Philippines’ flag. In 1985, then president Ferdinand Marcos mandated the use of a lighter shade of blue and red. But after the following year’s EDSA Revolution ousted him from office, the colors were restored to the deeper tones used in the flag that was unfurled in Kawit, Cavite in 1898 at the declaration of independence, marking a new chapter both for the banner and the country it represents.