Learn to be a ninja in Kyoto 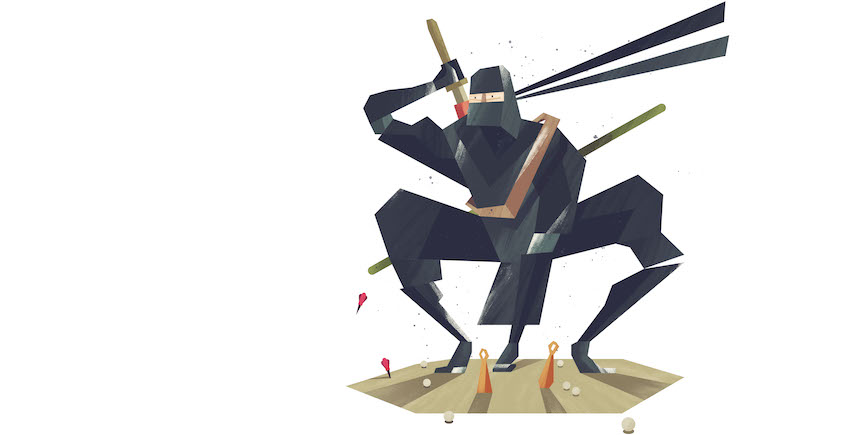 Spinning rapidly through the air, light flashing off its steel surface, the ninja star I’ve just thrown looks impressively deadly. With its sharp edges and generous heft, almost the weight of a retro mobile phone, it can cause a person serious bodily harm. Such an injury would be entirely dependent, however, on the thrower’s ability to hit his human target. This means that, even with this menacing weapon in my hand, I’m no real threat at all. The glimmering star I’ve just thrown may have looked frightening in mid-air but having missed its target by a mile and bounced off an innocent wall, it now lies on the ground, sad-looking and benign.

I turn to Sensei Izo and apologize profusely for my ineptitude, concerned I may have taken a major chunk out of the wall of his dojo. In a momentary flash of panic I thought he might send me flying out of the training room, banishing me forever. But he waves away my apology in that transcendently polite Japanese way. The training continues, and the childhood dream of becoming a ninja lives on.

With confident posture and eyes trained on my every movement, Sensei Izo casts a strong presence. He is clad in a jet-black shinobi shozoku, a traditional ninja outfit that is tight at the midriff but hangs loose around the legs to allow ease of movement. A black headband embellished by shiny metallic studs holds back his long, black hair. At 44 years old, he is lithe and fit, and looks well capable of carrying out the athletic manuevers commonly associated with ninjas.

Sensei Izo’s focus is total, until I make the occasional nervous joke. He indulges me, and his steely gaze dissolves as he breaks into genuine laughter, his whole body shaking with mirth. In these moments he is more regular dude than intimidating warrior, and that makes me more comfortable. Sensei Izo doesn’t run a sober dojo designed to slowly mold pupils into fearsome ninjas. Instead, Ninja Dojo and Store specializes in lighthearted, two-hour workshops where fanboys like me can attempt a few of the ninja skills we’d seen in the movies as kids — moving in fluid silence, for example, to avoid detection or lobbing a smoke bomb as cover for a quick escape. The most iconic elements of ninja culture are the skills they possess with a weapon in hand and at Sensei Izo’s workshops, students test a wide range of ninja weapons with an emphasis on enjoyment rather than actual achievement.

In the dim light, standing on traditional bamboo mat floors, surrounded by walls lined with deadly weapons, I feel a childish joy. After all, what man doesn’t harbor the desire, somewhere deep within, to be an ultimate warrior? That dream had prompted me to scour the internet for ninja schools in Japan. My search yielded more than half a dozen such establishments scattered across the country, from Tokyo to Akame. Sensei Izo’s was the only one I could find in Kyoto, where I was scheduled for a visit. Within 15 minutes of entering this dojo on the second floor of a downtown office building, I knew I had come to the right place.

Raising my right arm above my head, I try to keep my shoulder steady as I flex my elbow and flick my wrist. Sensei Izo instructs me carefully, over and over, but the technique is proving hard to learn. Once again, the star I throw flies wide off the bullseye. Less than 30 minutes into my lesson, I let out a loud, exasperated sigh as I realize I’m far too large, uncoordinated and skill-deficient to ever be a ninja.

But the master shows enormous patience for a  fellow ninja superfan. As an adult, Sensei Izo trained in ninja skills part-time for more than two years under another local sensei. But his fascination for ninjas began as a small boy. Like other Japanese children, he learned about ninjas in school, read about them in books, and marveled at their exploits in film and on television.

I grew up in Perth, Australia, thousands of miles from Japan, but my friends and I were similarly smitten by the cloak-and-dagger lifestyle of these enigmatic warriors. While traditional figures aren’t always popular among young children, ninjas and their more noble counterpart, the samurai, hold a degree of cool that cross age and nationality. This, despite the fact ninjas and samurai have not actually existed in Japan, in their traditional guise at least, for many years.

Ninjas emerged in the 15th century, when feudal Japan was riddled with military conflict and social unrest. Powerful figures of the period began recruiting men prepared to carry out dubious missions that warriors like the samurai would not execute.

Ninjas were drilled in the skills of ninjutsu, a discipline that incorporates elements of a range of different Japanese martial arts with an emphasis on guerrilla warfare. They were highly skilled warriors required to perform a range of shadowy missions, from assassinations to espionage and sabotage. Their secretive, morally-questionable deeds deeply contrasted with the samurai strict code of conduct. Known as bushido, this unwritten protocol resembled chivalry  and prioritized ethics, etiquette, loyalty and honor. So revered is the code of bushido that in the 1800s it became one of the main principles of Japanese culture. To this day, it remains highly influential in Japanese society.

Sensei Izo shows me the technique for walking without making a sound. It looks like a magic trick. He flexes himself at the knees and uses the power of his hips to seamlessly glide across the floor, all the while keeping his upper body perfectly still.

While samurai placed value on battling their adversaries face to face, ninjas always operated in stealth. They relied on the element of surprise — a good ninja was neither seen nor heard. In fact, Ninjas were so gifted at operating in anonymity that folklore began to build up around them and their covert abilities. In myth, ninjas were able to tread on water and render themselves invisible.

This stability of the upper body, Sensei Izo says, is crucial for a ninja to be able to focus and aim weapons at a moving target. When I try to imitate him, I wobble about with arms flailing. Who would have thought walking could be so hard?

I try again, and slowly work to the point where I’m making noticeably less noise as I move. Now how I’ll use this skill in real life, I have no idea, but right now I’m just pleased to be at least making some progress. I learn to glide forward with limbs locked in place. There’s hope for me yet.

At some point, I realize that what I’m really itching for is having another go at hitting the bullseye with ninja weapons. Sensei Izo nods in understanding and says this is the most popular part of his program. The myriad holes that litter the target board and surrounding wall prove it. All the weapon are for sale — from the long ninjato swords to the short, dagger-like kunai, handspikes called tekko-kagi, fukiya blowguns and tekken knuckle-dusters. I choose the blowgun. Not because it’s the most impressive, but because it’s the easiest to use. Within minutes I wield the fukiya like a pro. The bullseye is under constant threat from my scything darts. It feels like a triumphant end to the lessons. I stride out of the dojo swollen with confidence and dripping in newfound ninja skills. A childhood dream has been realized. Sort of. Now to become a samurai.

This article first appeared in the March 2017 issue of Smile magazine.