A perfect weekend in Iloilo

This culturally rich province in the Visayas has plenty to offer, from magnificent churches to fantastic food 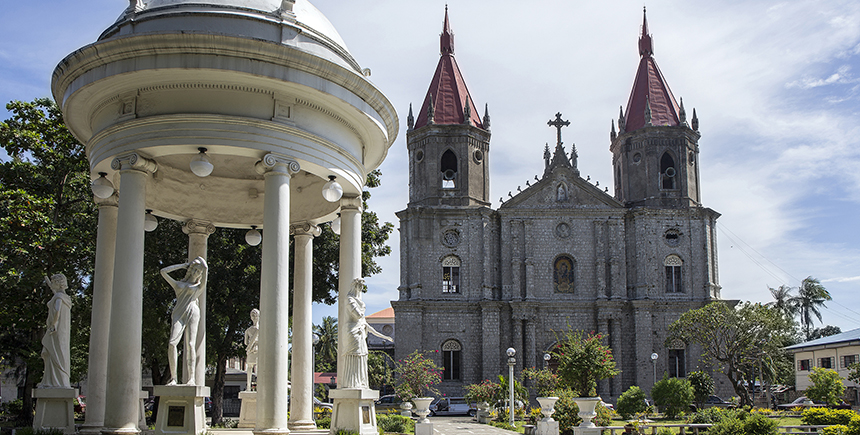 8.30am
Start your day with a good cup of joe at the Book Latte Café (De Leon St, Iloilo City Proper; +63 33 335 3558; facebook.com/booklattecafeiloilo). Besides the usual coffee options, there’s also a range of interesting lattes to choose from; try the Butterfinger latte, which exudes sweet-savory notes that balance out the bitter tinge of caffeine perfectly. Of course, there are books, too — with more than 1,000 tomes on its shelves, the café is every bibliophile’s idea of heaven.

10.30am
While it might be tempting to while away an entire day at the café, there are plenty more things to see and do in Iloilo. Head to Guimbal, which is dubbed the cleanest and greenest town in the city. It’s primarily known for its beaches and resorts, which overlook the clear blue waters of the Panay Gulf. However, it’s also worth exploring the St. Nicolas de Tolentino Parish Church, also known as Guimbal Church (National Highway, Guimbal). Made of coral stones and limestone blocks, it’s one of the oldest churches in the Philippines.

12.30pm
For lunch, make your way to Netong’s (La Paz Public Market, Huervana St, La Paz) for a taste of La Paz Batchoy — the dish that made the city famous. Think egg noodles swimming in a broth made from slow-cooked beef, pork, bones and marrow, all mixed with shrimp paste for an umami kick. It’s then topped with crushed pork rinds, fried garlic, scallions and a spoonful of bone marrow for a truly glorious dish.

2pm
Counter the ensuing food coma with yet more caffeine. Madge Café (La Paz Public Market, Huervana St, La Paz), one of best-loved coffee shops in Iloilo, serves its brews the traditional way — using tin cans as pots. The time-tested recipe for its coffee has been passed down from one generation to the next.

3pm
Step back in time and acquaint yourself with Panay culture at Museo de Iloilo (Iloilo City Proper). Some of the fascinating exhibits here include pottery, suits of armor, traditional weapons like spears and swords from the Mondo tribe, as well as the curious Santo Entierro (a sculpture of the dead Christ).

4.30pm
Drop by Original Biscocho Haus (8 Lopez Jaena St, Iloilo City) for some of the province’s famous crispy bread that’s twice-baked then coated with butter and sugar. Simple yet addictive, these snacks pair well with just about anything. They also travel well, making for great pasalubong.

6pm
Breakthrough Seafood Restaurant (Villa Arevalo District, Iloilo City; +63 33 337 3027; breakthroughrestaurants.com) is the perfect place for sampling the province’s abundant seafood. The beachfront eatery serves up freshly caught crabs, fish, squid and more; favorites include the aligue rice (rice cooked with crab fat) and the oysters baked with cheese. Wash everything down with a tall glass of green mango shake while admiring the sunset.

9pm
Cap off your evening with a few tipples at Brewery Gastropub (Pison Ave, San Rafael St, Iloilo City). Here, you’ll find what is perhaps the most extensive range of international beers in the city. Pair your ice-cold beer with some pub grub like Spam fries.

9.30am
If you have a penchant for specialty brews, visit Fuel.ph (Benigno Aquino Ave Service Rd, Mandurriao, Iloilo City; +63 33 323 1758; facebook.com/fuelph) for your third-wave coffee fix. It’s a cozy and beautiful space, with ever-friendly baristas who are always ready to engage in good conversation.

10.30am
Molo Church (San Pedro St, Molo, Iloilo City), or the Church of St Anne Parish, is known as “the feminist church”, thanks to the fact that all 16 statues along its main aisle portray female saints. Other design elements also point to this apparent femininity; for instance, the grooves in the church’s columns are reminiscent of the folds in a lady’s dress.

11.30am
Right beside the church lies Molo Plaza (San Pedro St, Molo, Iloilo City). Dubbed the “Athens of the Philippines”, it offers a taste of Greek culture in the heart of the province. The gazebo is surrounded by statues of six Greek goddesses: Aphrodite, Artemis, Athena, Demeter, Hera and Hestia.

12.30pm
Another dish that Iloilo is famous for is Molo Soup. Try this delectable combination of shredded chicken and meat dumplings in a thick, egg-like broth at popular resto Camiña Balay nga Bato (Osmeña St, Villa Arevalo District, Iloilo City). For dessert, be sure to order a cup of tsokolate (thick hot chocolate).

2.30pm
Take a lazy postprandial stroll along the Iloilo River Esplanade (Senator Efrain Treñas Blvd, Mandurriao, Iloilo City), which offers great views of the waterway. There are a number of coffee shops nearby if you need a shot of caffeine.

6pm
Round off your trip with dinner at Tatoy’s Manokan Seafood Restaurant (Baluarte—Calumpang—Villa—Oton Blvd, Villa Arevalo District, Iloilo City; +63 33 337 1360), another local institution. While it’s ostensibly a seafood resto, it’s better known for its lechon manok (spit-roasted chicken). Here, the chefs use darag (native chickens) that have been soaked in vinegar and calamansi for hours, then stuffed with lemongrass and tamarind leaves, before being roasted on the spit. The result? Tender, juicy meat infused with mouth-puckering flavor.

8pm
Smallville (Pasencia T. Pison Ave, Mandurriao, Iloilo City) — no, we’re not referring to the television series — is a popular entertainment complex that’s filled with bars, clubs and restaurants. Go bar-hopping and unwind with a tipple or two before hitting the sack.

Also read: 5 of the most beautiful heritage towns in the Philippines