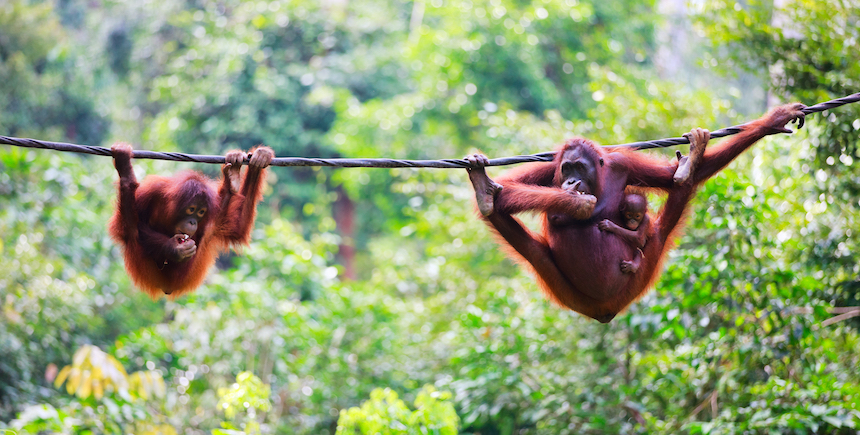 Few things can be as exhilarating as a trek in the dense jungle, especially in a tropical rainforest teeming with the most delightful and exotic wildlife. The Borneo rainforest is one of the oldest in the world, but this magnificent playground and its inhabitants are under threat — climate change continues to deplete forest cover, resulting in habitat loss for the multitude of species that thrive in it, and irresponsible trekking is adding to the harm.

Conservationists like Leo Biddle, who runs a rehabilitation center for endangered wildlife, are facing the issue head on and have their work cut out for them. Over a decade ago, he started working in Borneo and founded the Orangutan Project, a non-profit group that assists Borneo’s endangered wildlife, including the orang-utan, clouded leopard, binturong (also known as a bearcat), sun bear and false gharial (a type of reptile).

Every year, the main center in Sarawak receives up to several hundred animals. “Providing just food, medical care and accommodation for all of these animals is fearfully expensive and those costs continue to increase each year,” Biddle explains. “Furthermore, the mandate of the center is to rehabilitate as many of those animals so they can be released back to the wild. If it is expensive to keep animals in captivity, it is actually far more expensive to successfully rehabilitate and return them to the wild. For this, they need radio collars, skilled staff to follow and monitor them, etc.”

Managing costs of operation is just one of the challenges they face as a conservation entity. “One of the hardest things to cope with is that despite all our work and effort, practically every year the numbers of almost every single species we are trying to protect continue to fall,” says Biddle. In the case of orang-utans, Biddle shares that around 1,000 to 5,000 of them are lost a year – with a total population of only between 30,000 and 50,000, that creates a very grim backdrop to work with.

But while Biddle admits it can be hard to be both professional and positive when he sees the numbers, abandoning his work is the last thing on his mind. “The urgency of the situation — the dire need to do something now — is the reason I keep going. We must collectively and very soon inspire or convince people across the world to change the way that they are living and treating the planet.”

To start, Biddle shares some tips on responsible jungle trekking.

1. You do not need a parang (machete)

“Too many times we see tourists or their guides hacking away at the undergrowth as though they were intrepid jungle adventurer. It’s so unnecessary! They often don’t realize they are just one of thousands of tourists that might walk that trail in a year, and what they’re doing can cause a great deal of damage as some plants, vines and trees grow extremely slowly.”

“Every week, my staff and I clear up innumerable pieces of rubbish, including plastic water bottles, tissue, maps, and cigarette butts from tourists who walk within the parks.”

“Frequently spotting a monkey, a turtle or an orang-utan is not enough for many tourists; they want to get closer to get the perfect selfie or even to touch the animal. This shouldn’t be necessary to say, but that can be dangerous for both the tourist and the animals in question.” If you love a wild challenge, few places offer more thrills than the 140-million-year-old Borneo rainforest. Leo Biddle, conservationist and founder of Malaysia-based Orangutan Project, tells us how to take care of this awesome landscape and have your fun the environment-friendly way

“Take a break every now and then. It’s not a marching contest; take the time to see what you’ve come to see. Immerse yourself in nature so you can better appreciate and respect its beauty and serenity.”

“Don’t smoke or use perfumes and insect repellents (if you can bear it). Strong, unnatural smells travel far in the forest and may scare wildlife away, while perfumes and sweet-smelling repellents can attract bees, wasps and hornets!”

“Don’t scream or laugh loudly as it can sound like an alarm call, causing half the forest to hide until the potential danger passes.”

“Look far for birds and mammals, but don’t forget to look closely for insects, amphibians, orchids and the like. Borneo’s immense diversity is not limited to its birds and mammals. Often people trek its jungles obsessed to see just the orang-utan, and they end up missing much of what the forests have to offer.”

Catch Leo Biddle on Frontier Borneo, a brand new series featuring Leo himself, alongside a group of wildlife rangers, explorers, scientists and conservationists, who give us a glimpse into the thrills and breathtaking world of Borneo. Tuesdays, 9.55pm on Discovery Channel.

Also read: How to explore General Nakar in Quezon province on foot