3 things you must do in Seoul in winter 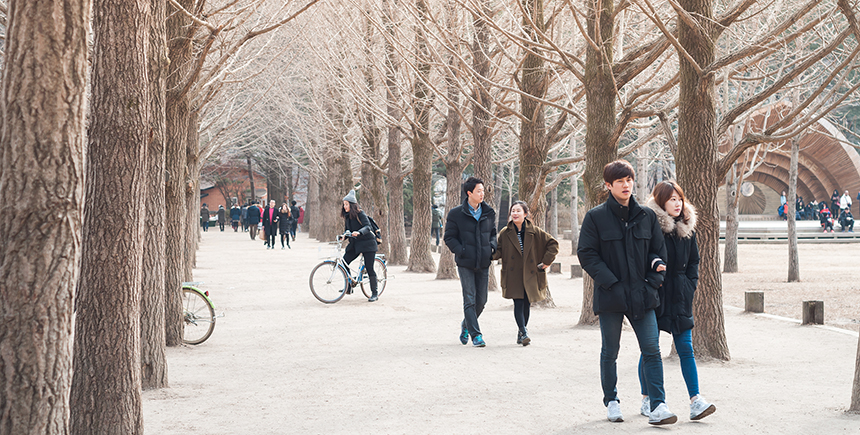 One of the many tree-lined trails on Nami Island (Photo: T. Dallas / Shutterstock.com)

Do you want to build a snowman?

There are a lot of ski parks around Seoul, but one of the nearest is Bears Town Ski Resort. All the equipment you need can be easily rented and they offer beginners’ ski lessons on slopes that are friendly but still breathtaking. If you’re feeling less adventurous, there’s the ice sled; or, you can simply build a snowman.
2536, 27, Gumgang-ro, Naechon-myeon, Pocheon-si, Gyeonggi-do, +82 31 540 5000, +82 31 540 5151; bearstown.com

Walking in a winter wonderland

Namiseom Island, also known as Nami, is a half-moon-shaped nature sanctuary made popular by Korean telenovela Winter Sonata, and the tree-lined roads are fairytale-like in their frozen beauty. Explore the wintry landscape at your leisure, and if it gets too cold, settle down next to a fire and warm up with some grilled sausages and a shot of soju. General admission is KRW10,000.
Namisum-gil, Namsan-myeon, Chuncheon-si, Gangwon-do, +82-31 580 8114

During winter, Seoul Plaza (City Hall) becomes a public ice-skating rink. It’s very cheap at just KRW1,000 for a full hour. You don’t even have to be on the ice to enjoy the experience — watching families and lovers glide and twirl under strings of lights is charming enough to feel like you’re in a romantic comedy, and more than heartwarming enough to drive away the cold.
City Hall Station (Seoul Subway Line 1,2), Exit 5

Also read: 4 tips on navigating Seoul as a tourist

This article originally appeared in the November 2016 issue of Smile magazine.

Mark Your Calendar: Dubai Reopens to Tourists on July 7th!