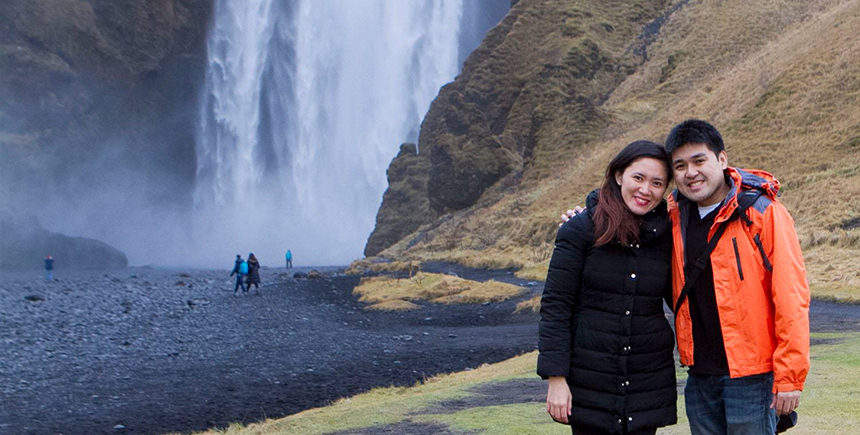 Tippy and Anthony Go at Skógafoss

Followers of their award-winning blog, The Googly Gooeys (googlygooeys.com), know them as Tipsy and Ponggo — the pink and blue goos depicted in the site’s colorful illustrations and commentaries. Founders and husband-and-wife team, Anthony and Tippy Go, however, are more than just their cool, funny characters — they’re photographers and artists, as well.

“I’m the illustrator/ cartoonist, but my husband’s toothy grin and personality are the inspiration for the silly tone of the comics,” says Tippy. (She’s the pink goo named Tipsy.) “On the side we also conduct watercolor and lettering workshops.” Now they also have a line of lifestyle products, Oh! Brighter Days, which is a collaboration with furniture shop Heima.

Being a part of The Googly Gooeys has certainly changed their lives in more ways than one, including their thirst for travel and their overall travel habits.

“The Googly Gooeys is another platform for us to share our travel photos and stories. Before this, we were just sharing our photos on our personal Multiply and Facebook accounts,” recounts Tippy. “The blog has changed our travel opportunities, though, since our trips during the last few years to Ilocos, Iloilo (for relief efforts), Boracay, Macau, Malaysia, Europe and New York all came about because of the blog.”

Do the couple’s travel styles differ a lot? “We both love taking photos of landmarks and scenery. When abroad, we also love exploring cities by foot. We love a good mix of mostly the outdoors, a bit of cultural experience and a taste of the city life,” Tippy says.

“Between the two of us, hubby is the foodie who makes sure that we get to try all the local food. On the other hand, I just make sure we get to visit any local art districts, art supply stores and modern art museums, if time permits.”

Memorable destinations the couple has visited include Iceland and Italy. “When we were in Iceland last November we went hunting for the northern lights, walked on a glacier, and visited the geysers and falls,” says Tippy. “Each Italian city pretty much looks like a di erent nation, with its own unique architecture and palette. That trip inspires my artwork to this day.”

A vacation for the Gos is just that — a time when they can enjoy themselves and live in the moment. “I noticed that when we’re traveling we rarely have time to write and draw, or even to blog,” she says.

The couple finds that they do have a lot to say once they get back, however. “Our favorite thing about being a part of The Googly Gooeys is that we’re able to travel, and share our story on the blog through comics and photos,” reveals Tippy.

“I love how the community comes together to share tips and comments about travel destinations. I also love all the travel opportunities that come with the blog, from being able to rediscover our beautiful country to the chance to cross out some items on our bucket list.”

“This will make you discover a lot of things about yourself. You learn to become more independent, and you get to pick up the local language more quickly.”

Travel in a group if you’re on a budget

“From local road trips to trips abroad, in our experience this is the most cost-effective way to travel. Accommodations and transportation can be divided easily among a bigger group. Also, there are a lot of museum passes and train tickets in Europe that are meant for large groups.”

“This way you can plan the photos and activities ahead, as well as prepare for the weather. It’s so funny how the hubby and I always argue over this: I want to wear summer dresses while he, like a polar bear, thrives in freezing temperatures. We were in New York last February and it was crazy cold: the “hottest” was 2 deg C while the coldest was -18 ̊deg C, with a real feel of -28 ̊deg C. We prepared for it rather well, except for an unusually cold last day, but it was fun anyway.

“We were in Paris last November, and both of us were really happy we finally caught the peak of the fall season, when the leaves were a combination of neon and brown. They were really picturesque.”

Get in touch with local friends

“It’s nice to have some friends around the world because you always get to see a place from their point of view. They can help you find the best non-touristy places, and the best places for local delicacies. This tip came in especially handy for me when I visited Malaysia last August. I was there for a book fair and we had free time in the evening. I was so happy to have met some local bloggers. They took me to local cafés, and we did an impromptu watercolor session in one of them.”

“We love going to places when it’s not a weekend that’s popular with tourists; for example, we often go to Baguio on Mondays and Tuesdays. We also avoid long weekends at everyone’s favorite destinations, and love flying during the off-peak season so we can avoid long lines and crowded places. The expenses are lower, too!”

Believe in the kindness of strangers

“I would have probably been the last person to tell you this a few years ago, but through my trips last year I realized I wouldn’t have been able to get around if it weren’t for the people who helped me along the way. There was the guy who helped me pull my 25kg luggage up the stairs; the couple who helped me buy my ticket; the bus driver who gave me a free ride and refused to accept a tip because I took the opposite route; the old man who could barely speak my language, yet went out of his way to look for someone who could answer my questions in English. There were even days when I would get teary-eyed because it was as if angels were being sent my way.”

This article originally appeared in the October 2015 issue of Smile magazine.

Brad Pitt Looks To The Stars