This Is the Trendiest Neighborhood in Tokyo Right Now

Plus, it's just a train stop away from Shibuya 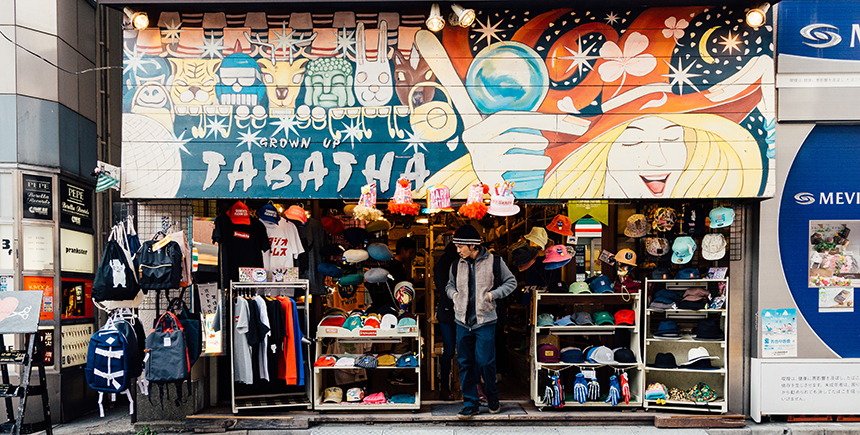 As an introverted city girl, Tokyo ticks all my boxes. Jetting into Japan’s capital is like coming home, where everything thrums with a vibrant yet restrained energy, everyone is kind and honors your personal space, and serene parks serve as decompression chambers when this modern wonderland’s pace reaches fever pitch. Despite the language barrier, Tokyo is a fascinating city to get lost in — large and sprawling, it holds several districts, each with its own distinctive character. Simply hopping on a bus or train can take you from the glamorous to the geeky to the gritty; and in the cool fall months, it’s especially pleasant to explore neighborhoods further by bike or on foot, thanks to tourist-friendly bike rentals and sidewalks canopied in autumnal hues.

Certain that Tokyo held more surprises for us despite our regular visits, my husband and I decided to explore a new neighborhood on our most recent pilgrimage to the Japanese capital of cool: low-key Shimokitazawa has been a bohemian enclave for creative and counter-culture types since the 1960s. Featuring funky boutiques, hole-in-the-wall cafés and vintage shops, but without the hipster snobbery, Shimokitazawa is often likened to a more authentic, less touristy version of the better-known but similarly flavored Harajuku.

Just a train stop away from trendy Shibuya, “Shimokita” sits in the Setagaya residential district, unencumbered by skyscrapers and massive department stores — for now, at least. There’s great concern that ongoing development may eventually drive out the indie establishments that make Shimokita unique.

Though Shimokita’s labyrinthine roads can seem confusing, it was easy to navigate our way around the pedestrian-friendly neighborhood. It was, we also discovered, fertile ground for treasure hunts — everything we didn’t really need, but just had to have, was out there. While my husband eagerly thumbed through decades of music at second-hand record shops, I wandered into nearby alleys to score vintage shoes in mint condition, and stock up on paper goods and handmade jewelry by local artisans. Beautiful, backstory-laden objects sparkled in plain sight — handed-down crystal glassware and traditional ceramics, trendy winter coats, authentic army jackets, vintage toys, pre-loved luxury bags, bright hand-embroidered caps, and the prettiest antique brooches made even more tempting by shopkeepers who told us of their provenance in charmingly halting English.

When our arms grew heavy with shopping bags, we deposited our loot back at our cozy Airbnb, before heading back out for round two (or three, or four). Whenever we got hungry, we stopped for sushi or a delicious Croissant Taiyaki. We fawned over artsy finds at the charming shop San Sa To and squeezed four people into a purikura (photo sticker) booth at the gaming arcade for a hilarious, animé-esque memento. Circling back to face the south exit and taking the road towards the right, we ventured under the arch that marks the northern side of colorful Shimokita, where every space — from the oddball vintage shops to the modern, minimalist designer boutiques — sat like multiple pots of gold at the end of a rainbow. It’s no wonder Vogue declared Shimokitazawa “one of the coolest neighborhoods in the world”. One other piece of advice the fashion bible should have dispensed: if a little treasure catches your eye, snap it up. I still smart at the thought of the exquisite deer brooch I vowed to go back for, but somehow never did.

Vintage wonders aside, it was the energy of the neighborhood, nestled within such a massive megalopolis, that made it a true find. It’s a place of hole-in-the-wall cafés, where shopkeepers wrap our omiyage (souvenir gifts) in exquisite packaging; where we’d nod hello to neighbors as we set off for the day; where the lady at the corner store has friends over after shop hours; where a couple kisses tenderly by a doorway, and — our biggest joy — where we would happily announce “Tadaima!” (“We’re back!”), to which our hosts would warmly reply “Okaeri!” (“Welcome home!”).  It’s just one of those places you can own in your mind, the memory of which you summon when you need a dose of good vibes. Even if we had to leave at the end of the week, we knew we’d always have Shimokita.

Also read: 7 weird and wacky things to do in Tokyo